An investment within a picturesque area

In the very
heart of Warmia

Warmia Resort is located in the very heart of Warmia – in Woryty in the Gietrzwałd Commune. Woryty is an extremely charming village surrounded by forests and meadows, whose surroundings are hilly landscapes enriched with numerous lakes. The most important advantage of Warmia Resort is its close proximity to nature – both pine forests and a cosy beach. Nearby there is also a sanctuary in Gietrzwałd, as well as the capital of Warmia and Masuria – Olsztyn.

Warmia Resort is an ideal place for those who want to relax in the bosom of nature, in quiet, comfortable conditions – perfect for a weekend trip or holiday vacation.

Woryty is a small town, to which tourists have excellent access thanks to the national route E16 – only 20 km from Olsztyn and 25 km from Ostróda, and the national route E7 – 214 km from Warsaw and 152 km from Gdańsk. In addition, near the resort there is the Olsztyn-Mazury airport – only 77 km away. 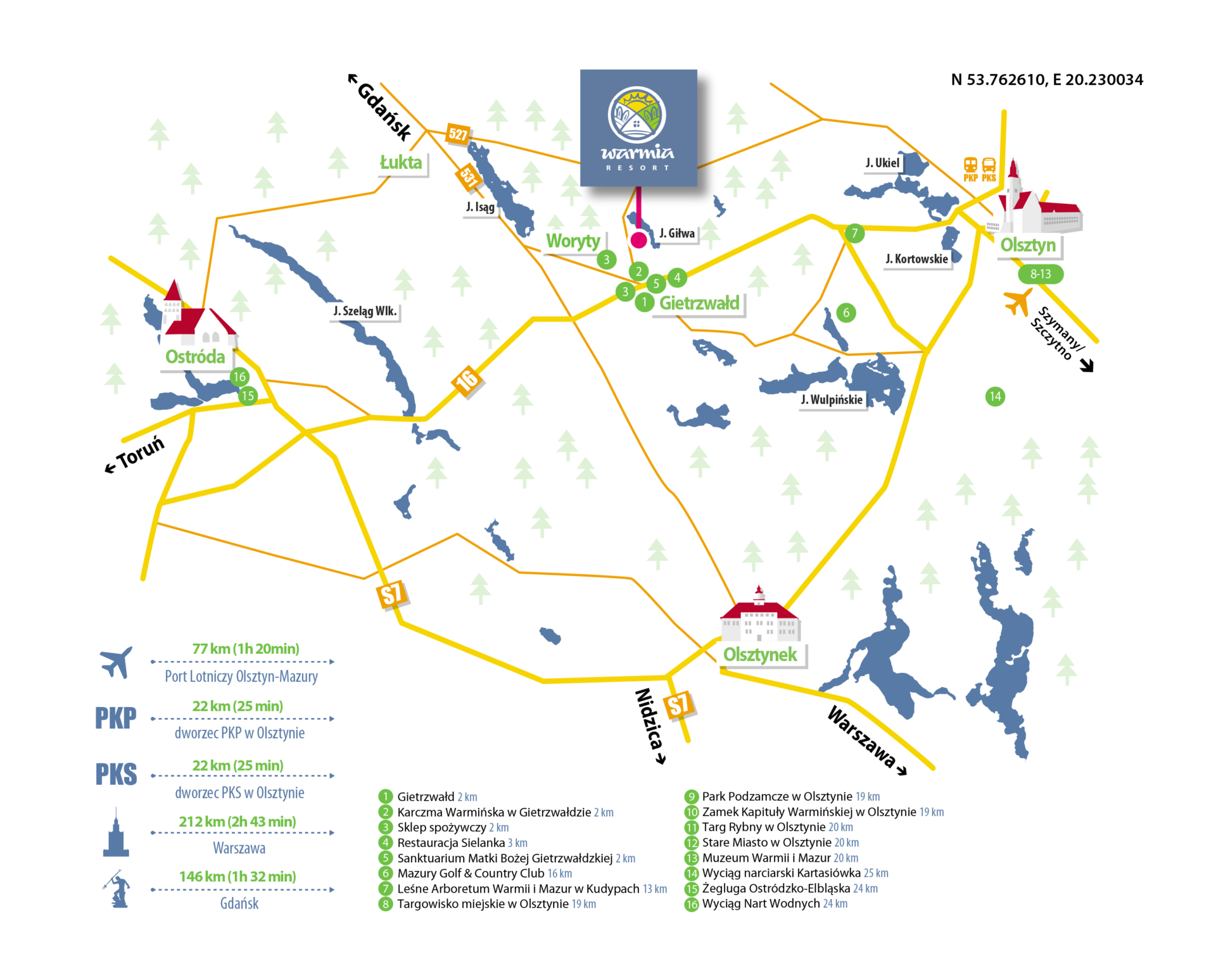 Within a short distance from Warmia Resort, there is a wide range of tourist attractions ensuring the possibility of active and spiritual rest. We encourage you to visit places such as:

the only recognized as authentic Polish place of Marian apparition, known all over the world. Every year over 1 million pilgrims visit this place. It was here, in 1877, that the Virgin Mary appeared to two girls – Justyna Szaflarska and Basia Samulowska – on the maple, speaking to them in Polish. During the apparition, she announced, among other things, the easing of the persecution of the Catholic Church. The moment of revelation is considered to be the moment of awakening of the national consciousness. Gietrzwałd is an important centre of religious cult.

an ideal attraction for fans of bicycle trips. Located far from busy roads, they allow you to admire the Warmian nature and relax in blissful silence. In the municipality there are numerous bicycle rallies organized on one of the three routes – blue, yellow or black.

the late Gothic Church of the Nativity of the Blessed Virgin Mary dates back to the 15th century. It is the central part of the Marian Sanctuary – by many people called the Polish Lourdes. The place is visited annually by crowds of pilgrims praying at the painting of Our Lady and Child from the 16th century. The Sanctuary is highlighted by the main altar, the painting of the Gothic wooden pietà from 1425, paintings from the eighteenth century and a neo-Gothic chapel from the second half of the nineteenth century.

an inn received with many awards. Its smells float all over the village – visitors praise the original taste of regional dishes. A rich menu encourages you to try over 80 dishes such as ‘dzyndzałki’ or ‘zaklepki’. Every Friday, thematic events are organized on its premises to allow feasting until dawn. Contact: tel. +48 89 512 34 57

spring blessed by the Virgin Mary in 1877. For many years it has been a relief for the sick and suffering. Built thanks to Augustyn Weischel, the parish priest who persuaded the girls to ask the Mother of God if the faithful will recover from their illnesses.

The Apparition Chapel in Gietrzwałd

erected during the Marian Apparition, with a statue of the Virgin Mary. It is known for its simple, neo-gothic form, with a sloping roof and a cross on the top. Our Lady appeared on a maple – it has not survived to this day, but a piece of it is stored in the glass case of the chapel.

Way of the Cross in Gietrzwałd

an attraction of the Marian Sanctuary. The monumental Way of the Cross was created in 2007. It consists of cream-coloured brick chapels with carved stations leading the way from the place of the miracle of revelations and the spring on the hill.

a two-kilometre section connecting Woryty with Gietrzwałd. It allows you to admire beautiful and unusually old maple trees, which have been growing here for over 100 years. The section is considered to be the first and only Cultural Park in Warmia-Masuria – old trees are protected from logging and professionally cared for.

a classicistic chapel from the turn of the 18th and 19th centuries, made of brick and plastered. Located at the crossroads of roads leading from Gietrzwałd to Woryty. It provides a unique view of the basilica and the Warmian landscape.

these small, wooden chapels were built in 1877. They are located at the Rosary Avenue, which is planted with hornbeams. They are an important route for faithful visitors who pray the rosary. They lead to the miraculous spring.

the building fortunately survived the war. In 1930-1939 there was a Polish school there, and it was one of the few educational centres in Warmia. It is distinguished by a characteristic red brick and a sloping roof. The building is currently used as a residential building.

the trail of Gothic Teutonic castles connects Poland, Lithuania and Russia. The international project aims to promote historical, cultural and tourist regions. The Warmia region is the legacy of the Teutonic Knights – many of the buildings have preserved their original architecture to this day. Tourists can use the quest application as a guide. We recommend visiting the Castle of the Warmia Chapter House in Olsztyn, the Castle in Ostróda, Nidzica, Lidzbark Warmiński, Kętrzyn and Ryn.

the museum is located in a Gothic castle from the 14th century. Nicolaus Copernicus was famous inhabitant in the years 1516-1521. An important element of the museum is a commemorative, handmade astronomical plaque from 1517 and his living place with personal items. It is also worth visiting the well in the courtyard and the castle tower allowing you to admire the panorama of Olsztyn.

The Teutonic Knights' Castle in Ostróda

a castle with over 700 years of history. Considered to be the oldest and most interesting monument of the city. Built in 1349 in red brick. In the past it used to be a Teutonic castle, today it houses the Cultural Centre.

The ski lift for water skiing and wakeboards in Ostróda

an ideal place for water sports enthusiasts. Tourists can use the 800 m long track located on Lake Drwęckie in Ostróda. On the shore there is a complete infrastructure for visitors – a changing room, equipment rental and a shower.

Ship trip along the Elbląg Canal

Elbląg Canal is the longest sailing canal in Poland. Its fragment is considered a relic and has the status of a historical monument. Tourists can take part in one of several interesting cruises.

The ethnographic park in Olsztynek

the object is located more than 100 km from Warmia Resort but it is worth visiting. In the midst of the vegetation there is a headquarters of Adolf Hitler, which resembles a small town hidden in the forest. The headquarters includes, among others, 2 airports, barracks, shelters, railway station and heat plants.

The historic sanctuary ‘Pearl of the Baroque’ in St. Lipka

the sanctuary is distinguished by its richly decorated and finished interior, reminiscent of an Italian basilica. The main altar and the organ dating back to the 18th century are admirable. For many, the history of the founding of the Marian cult in St. Lipka is considered a criminal story from the fifteenth century. It should not be forgotten that the convict was pardoned because of his conversion.

The oldest building in Warmia and Mazury

the object is located on the forest glade in Braniewo. It used to serve as the Gate Tower in the former bishop’s castle. Today it is the only surviving part of the castle dating back to the 13th century. In the years 1320-1330 a chapel was built in its interior. At present, it is not possible to visit its interior, although the works connected with restoring its second life are in progress.

Warmia Resort is the first such investment in Poland. We offer two-level villas with a high standard of finish in the condo system. The investor gains a share in the entire activity of the Warmia Resort investment, achieving an annual profit of 6%, proportional to the contribution made.

By choosing this form of savings investment, you become the owner of the Villa and the land. You can earn money on it and even live in it in the future.